In the Marche we are lucky because we have the largest variety of traditional local foods in all of Italy. You could stay two weeks and try a different dish every day.

We have our beautiful geography to thank. The Sibillini mountains to our west provide truffles, sheep, cheeses, cattle, chestnuts, and boar. Countryside foothills abound with wheat, vegetables, olives, and fresh produce. Area farms raise pigs, chickens, ducks, and rabbits. And the Adriatic to our east supplies not only our area, but all Italy with an abundant variety of fresh fish and seafood.

Our location also reflects our food heritage. Being just over the mountains from Rome, and connected by the ancient Via Salaria, we have Roman influences. Greeks and North Africans landed on the coastline and settled, imparting some of their culinary customs. So there really is something for everyone, no matter what your food preference is.

Vincisgrassi is a multi-layered lasagna that originated in Macerata. Everyone makes it a little differently, and some use vino cotto in the pasta dough. The meat and cheeses used can vary but often include veal, prosciutto, chicken livers and giblets. Historically it was made at special occasions but it’s often a menu item, and surprisingly light considering the many layers.

Ciauscolo, or ciabuscolo is a pork sausage made with highly ground meat and often white wine or vino cotto. It is lightly smoked and dried in a cool place for a couple of months. Eaten raw as an antipasto, it is often spread on bread. It’s also delicious as an ingredient in filled pasta or polenta.

Brodetto is a fish stew famous along the coast. It is thought to have been invented in Athens and spread throughout the Mediterranean by the Greeks. Each town makes their own version and asserts it as the best. I have 5 different recipes for it in one Marche cookbook. Every preparation calls for an assortment of fish, often as many as 13 types. Scorfano, or scorpion fish, is almost always included in a traditional Marchigiano Brodetto.

Olive all’Ascolana, or fried stuffed olives are ubiquitous at restaurants and as street food, and originated in the Ascoli Piceno province just south of Casa Pace e Gioia. Perfect as an appetizer, local Ascolane olives are pitted, stuffed with a meat mixture, breaded and fried. The filling can vary but typically includes a meat mixture with nutmeg. Vegetarian options exist and the Montelupone artichoke stuffed and fried olives are fabulous!

Cinghiale con le Pappardelle or wild boar with pappardelle, can be found in other Italian regions but what distinguishes a Marchigiano dish is wild fennel, which grows abundantly in our area and complements the flavor of the boar. The boar is marinated at least overnight, if not for days, prior to making the sauce.

Bistecca di Scottona Marchigiana, a grilled steak of a young, prized Marchigiana cow which has IGP status, a symbol of high quality. The Marchigiana is a powerful white cow with muscles that have an excellent proportion of fat to create a succulent marbled meat. Until the 1950s they were also used as working animals.

Coniglio in Porchetta, or Rabbit with Wild Fennel is a local traditional dish for both the rabbit and the wild fennel, two Marchigiani trademarks. Preparations vary, and sometimes the rabbit is stuffed, but the ingredients always include pork, wild fennel, and garlic.

Porchetta Roasted pork, not to be confused with Coniglio in Porchetta, above. Is roasted pork usually served as street-food style sandwiches, is popular throughout Italy, but is distinguished in the Marche again by the presence of wild fennel. Historically, the Marchigiani prepared a porchetta for the festival celebrating the wheat threshing.

Cicoria, or chicory is on almost every menu in our region. Indeed, it grows wild in between our grapevines. These slightly bitter leafy greens are usually boiled, then tossed in a pan with olive oil, chili pepper, garlic, and salt. It’s a must-try, at least once.

Cappelletti in Brodo di Cappone is a homemade pasta stuffed with a mixture of cooked veal, chicken, pork, mortadella, and parmesan cheese, then folded to resemble a hat (cappelletti). They are served in a delicious capon broth. In the past, this was served only at Christmas but nowadays is available in the fall-spring seasons.

Agnello allo Scottadito is seasoned lamb roasted over a hot grill and served so hot it will “burn your fingers” (scottadito). It’s often included in a “mixed grill” dish. This is Matt’s all-time favorite.

Pecorino dei Monti Sibillini is one of our many fantastic local cheeses. This one in particular is in the Slow Food Presidium and is slightly aged. Cheeses are often featured on antipasti platters or as a dessert. You can also find it at weekly markets and the grocery store in Colmurano.

Chickpea soup (zuppa di ceci) was often consumed by local farm families because chickpeas were cultivated locally and they could be stored for a year. It’s often featured on menus and is really delicious. Sometimes prosciutto is added but usually it’s a vegetarian dish.

Gnocchi with Duck Ragu is typically slow cooked in a sauce of red wine, tomatoes, and herbs until the duck meat falls from the bones. Fresh potato gnocchi are folded into the sauce. It’s especially popular around our nearby area, especially the Abbadia di Fiastra.

Truffles with anything. The Marche is internationally underrated for our truffles but we have both white and black varieties, which makes our truffle season longer. If fresh truffles are available you will see them on menus (tartufo). My favorite is truffles shaved on top of carbonara. 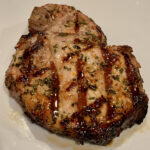 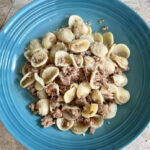 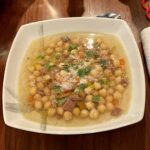